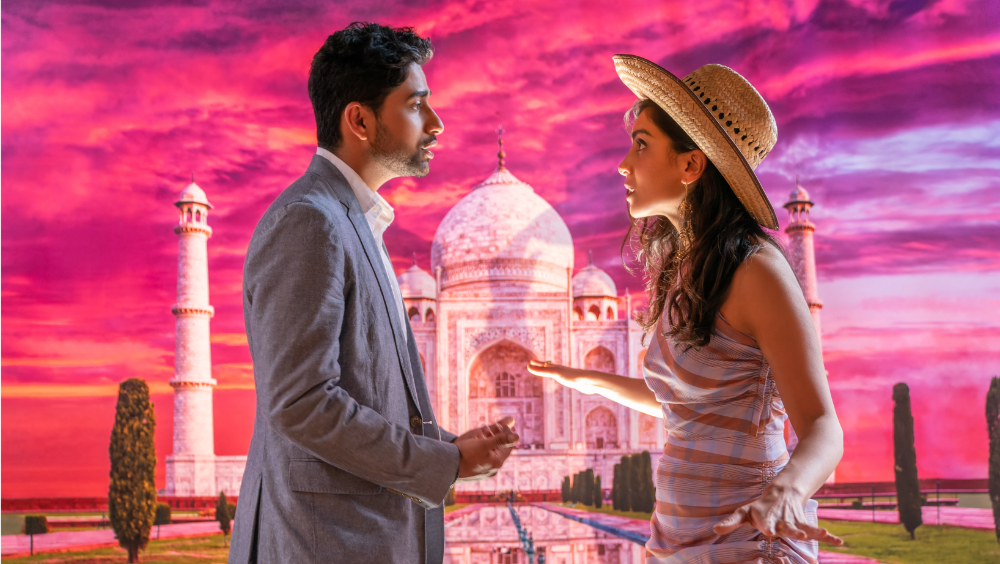 When a rom-com clicks, that usually means it’s firing on both cylinders: romance and comedy. The sparks fly, the jokes tickle, the situations swirl. But then there’s the sort of comfort-food rom-com-of-the-week like “Wedding Season.” It features a couple of highly appealing actors, Pallavi Sharda and Suraj Sharma, in the tale of two sexy assimilated Indian Americans from Jersey City who are doing all they can to escape their parents’ legacy of arranged-marriage traditionalism.

The movie has jokes, like the barbed insults the two exchange when they meet at a diner for cheeseburgers and sloppy fries after learning that their folks signed them up on the same dating app. It has twists, like when they figure out that they don’t like each other but agree to enter into a fake relationship, all so that the local yentas will stop pestering them. It has turns, like when they realize they do like each other, so that now they‘re faking the fakery. It has secrets and deceptions, along with a generic semblance of the spinning-top vibe a movie like this one strives for.

Okay, but is any of this actually, you know, funny? “Wedding Season” is good for a few smiles, a sprinkling of CTM moments, and so on. But it’s not as if the movie is going to leave Ben Hecht nodding with delighted approval from screwball heaven. It’s a processed confection that has come off the streaming assembly line. Yet if the comedy here is mostly routine, the romance is another thing. It really does work, because the actors don’t just phone in the love story — they dance with it, commit to it, and own it.

The biggest difference between a romantic comedy you’ll see on Netflix and the kind of rom-coms that have played in movie theaters since the early ‘90s (though there are now just a few of them per year) is that the theatrical version is almost always built around brand-name stars, whereas the streaming version often features little-known actors who are on their way up (or maybe even not). That can make these movies seem a pale imitation of the real thing — the rom-com as fan fodder, minus the marquee sparkle. But there’s a weird way that it can give a trifle like “Wedding Season” a certain advantage. We’re supposed to believe that the characters in a romantic comedy are real people, and in the synthetic big-screen rom-coms that used to star Sandra Bullock and Matthew McConaughey and Reese Witherspoon and Owen Wilson, the movie-star factor was always hovering. No harm there; that, of course, is what movies are.

And I enjoyed how direct and appealing these actors are. Sharda, who has worked in Britain and Bollywood, has a no-nonsense tartness reminiscent of Annabella Sciorra, and Sharma, tall and amused, makes Ravi a chivalrous Teddy bear who seems to have transcended life’s problems — until it turns out that his whole image is a bit of a house of cards. The two characters are defiant independent souls, which is what makes them perfect for each other. But the issue of seeing them navigate their parents’ control-freak matrimonial fervor lends the story small tugs of tension. It’s the same theme that gave “The Big Sick” its sneaky hilarity and euphoria — though that film, let’s be clear, is a Ben Hecht comedy compared to this one.

Yet in “Wedding Season,” the tension between the Old World arranged-marriage view of things and the 21st-century do-what-you-please view of things has more resonance than you might expect. Many of us tend to regard this kind of conflict as beyond irrelevant. (It felt totally archaic to me when I first encountered it watching “Fiddler on the Roof” in 1971.) But apart from the fact that it remains very much alive in some Indian American families, it works in “Wedding Season” as a kind of metaphor. In this movie, the prospect of arranged marriage hovers over the action like a god reminding the characters that they can’t stay young forever.

The movie, incidentally, is called “Wedding Season” because Asha and Ravi are set to attend more than a dozen weddings over the summer, which is why they decide to fake having a relationship. It will give them cover from all the busybodies who are trying to set them up. One of the people getting married is Asha’s sister, Priya (Arianna Afsar), whose fiancée, Nick (Sean Kleier), is twisting himself into goofball knots trying to become “Indian.” Some of this actually is funny, but there’s also a touching undercurrent to it. Priya is the first person in her family to marry outside her nationality, and the movie makes us feel what a leap that is. As stodgy as the parents are, “Wedding Season” lets us see things from their point of view. The film recognizes that marriage is always about more than two people — it’s about how the world moves forward. “Wedding Season” might just leave you with a tear in your eye as you watch the world inch ahead with grace.