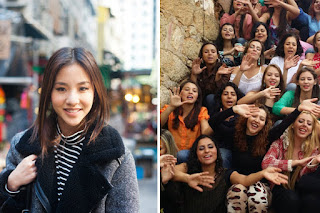 Certain cities and towns are flush with females and need more men
And while a census quickly quashed that fable – certain cities and towns flushed with females are now springing up across the globe.
Where men are in hot demand and women will do anything to attract a male partner.
They will turn a blind eye to cheating, publicly appeal to eligible men to come to their female-dominated town – and even PAY men to be with them.
The city of Dongguan has long been labelled China’s sex capital after it was revealed a whopping 10% – around 300,000 women – of the population were working as prostitutes.
But last month the city hit the headlines again for its raunchy behaviour.
Pictures emerged of men walking hand–in–hand with two or even three girls.
CENSEX CITY: Factory bosses in Dongguan prefer to employ women over men because the fairer sex …Why? Well, Dongguan is an industrial powerhouse within China – where factory bosses prefer to employ women over men.
According to reports, women are seen as more trustworthy than men – and are therefore given all the jobs.
Blokes are left with plenty of time on their hands to find a partner.
Dongguan is like no other city in China – a country which has a huge gender imbalance.
By 2020 it is thought there could be almost 24million men unable to find a partner.
But in Dongguan unemployed worker A Yi admits his girlfriend pays the bills to make sure he stays with her.
Another man – Li Bin – said he had three girlfriends who worked in factories.
He lives with one, is in a relationship with another and treats the third as a lover.
“They all know each other,” Li Bin said.
CENBILLS: Li Bin said he had three girlfriends who all worked in factories
But lads if you’re already thinking about booking your next holiday to Dongguan, wait until you hear about the town of Noiva do Cordeiro.
The houses are painted lilac, pink and orange, the shrubbery is immaculately maintained and there seems to be a distinct feminine touch about the place.
And that’s because the town – in the hills of southeast of Brazil – is inhabited by 600 women – 300 of whom are single.
The world learnt of Noiva do Cordeiro when its women appealed for men to come to the town last year.
In the public plea Nelma Fernandes told a newspaper: “Here, the only men we meet are either married or related to us.
“I haven’t kissed a man for a long time. We all dream of falling in love and getting married.”
Some of women are married with families – but their husbands are made to work away from home during the week, before returning at weekends.
Sons are bizarrely sent away from the town when the reach 18.
In Noiva do Cordeiro women are married with families – but their husbands are made t…
The settlement dates back to the 1890s when a young woman – accused of adultery – and her family were excommunicated from the Catholic church.
Women gradually came to the town and swelled the female-dominant population – but in 1940 a pastor – Anisio Pereira took one of the women, aged 16, as his wife and set up a strict church.
He imposed strict puritanical rules on the female community – banning them from drinking alcohol, listening to music or using any contraception.
When he died in 1995, the women decided to never allow the town to be run by men again.
“Our town is prettier, more organised, and far more harmonious than if men were in charge.”
The world learnt of Noiva do Cordeiro when its women appealed for men to come to the…
Victoria in Australia is one of six states which has a clear gender imbalance.
At the last population count Victoria had the worst man drought – 98 males to every 100 females – in the country.
And although those figures don’t sound too bad, across the state there were 58.399 more females than man.
Sophie – a single woman, aged 26 – said she would be happy to move home if she were to meet a man outside the state.
“If I met someone I was compatible with who didn’t live close by, then I am sure we’d find a way to overcome distance,” she explained.
GETTYLONELY?: In Hong Kong, there are 209,000 women living alone
A recent census showed one in five Hong Kong women will remain single for the rest of their lives.
Right now, there are 209,000 women living alone – and that figure is rising rapidly.
With so many young women vying for the opposite sex’s attention – men can work harder in their younger years before choosing to look for love.
For the first time ever population records show gender imbalance is a global problem with the huge countries – like India and China – dominated by men.
It is therefore vital places like Dongguan, Noiva do Cordeiro and Victoria are celebrated and become holiday hotspots for men across the world.