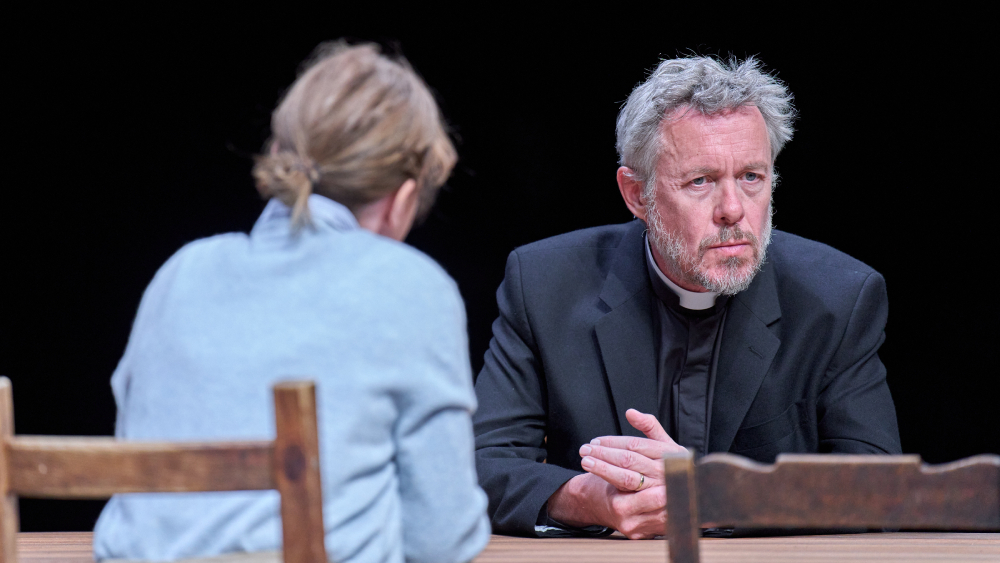 A place for everything and everything in its place. Although that maxim about neatness might apply to the intentions of the characters living in the English country vicarage in “The Southbury Child,” it’s actually better as a description of the way Stephen Beresford’s all-too-orderly new play (now running at the Bridge Theatre in London) is written. Carefully contrived characters including the ambitious young clergyman, the unmarried young woman and the adopted Black daughter are conveniently assembled to illustrate arguments, but despite some good jokes along the way, drama is replaced by dilemmas debated.

Alex Jennings has not only played roles written by Alan Bennett, he has even played Bennett himself as a character, and there are shades of that writer’s droll approach in his nicely dry, deliberately unshowy performance as David Highland, a longstanding but flawed Church of England vicar. As becomes apparent in the opening scene, he has opened the door to trouble in the community over his refusal to let the family of a child who has died decorate the church with Disney balloons for the funeral service.

His refusal sets him on a collision course with the community that builds an increasing head of steam against him. He believes his stand over the church and its dignity to be built upon deep principle. But in the minds of many, including members of family, it is hypocrisy of the worst kind, given that he has had an extra-marital affair and has recently foresworn his fondness for alcohol having wrapped his car around a tree while driving under the influence.

The church looms large across the back of Mark Thompson’s single set, but the play’s focus is less concerned with the place of worship than the reactions of everyone around David, who all neatly offer up their positions on everything.

Beresford gradually presents David’s family alongside other local characters but through no fault of the cast, too many come across as mouthpieces for positions rather than as fully fledged characters. Holly Atkins in a minor role as a policewoman fares best, not least because she is one of the very few whose position on things is unclear.

Elsewhere, characters’ reactions are too guessable. Few are allowed to develop from their first appearance in which everything is immediately overstated, not least via over-deliberate costuming. The excellent Hermione Gulliford does everything she can with well-to-do, high-handed busybody Janet but, given her fur-edged jacket, sharp hair and cliché spike heels, she has nowhere to go.

As the anger beyond the vicarage rises, the tenor of the debates across the kitchen table grow more urgent. Everyone is given a predictably late-flowering speech in which they explain themselves — from Phoebe Nicholls’s tired but steely wife who wants her husband to give way, to the new vicar who predictably reveals the reason for being teetotal and the demands of his (unseen) male partner. And since most of their attitudes are built not from unfolding action but from circumstances past or offstage — the adopted daughter’s meeting with her birth mother, for instance — it’s hard to engage with them emotionally. Even David’s onstage relationship with alcohol is written about and acted in a safe manner. The exception is a Martin McDonagh-esque plot switch around another death, with a conclusion that raises a gasp but reveals little more than its authorial contrivance.

It makes sense to use something so old-fashioned as a play set around a kitchen table in order to discuss ideas about what is old-fashioned and how much one should take on new ideas. Beresford is attempting to put new wine into old bottles. Nicholas Hytner’s deft production honors that, but cannot disguise the fact that this increasingly over-plotted play is two-and-a-half hours with scarcely a moment of subtext with which to reel in the audience. A play about knotty decisions is a loose, too-easy watch.