Skip to content
Home » Entertainment » Matt Groening on His Love of Jazz, How It Found Its Way Into ‘The Simpsons’ and Curating a New Jazz Video Playlist for Qwest TV (EXCLUSIVE) 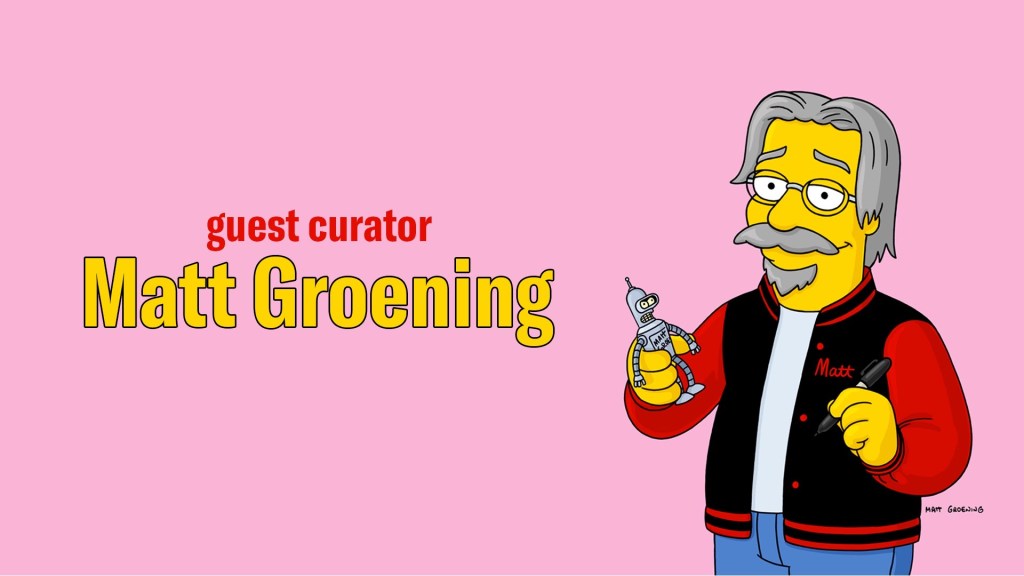 “Can we go deep into the obscure, or do we need to stay mainstream?”

When Matt Groening asks that question, the invitation is tantalizing to consider. In this case, Groening is talking about jazz, and specifically about his new partnership with Quincy Jones’ music-video hub, Qwest TV. His mission for Qwest was a curated video playlist revealing the jazz influences crucial to Groening — personally, professionally and to “The Simpsons,” most famously in sax-playing characters such as Bleeding Gums Murphy and Homer’s precocious daughter, Lisa Simpson.

“When I was invited to do this, the first thing I did was make half of my list obscure and the other half artists that most people had heard of,” says Groening, the beloved animator/creator of the “Life in Hell” comic strip, the decades-long Fox series “The Simpsons” and the adult-oriented “Disenchantment” at Netflix.

His curated film-fest is available exclusively on Qwest TV starting Oct. 27. In accordance with Qwest TV’s mantra, Groening’s curated film slate highlights a genre-less future where the world’s best music sits on one stage. Called the “Netflix of jazz” by BBC Radio 3, Qwest TV, which opened shop in December 2017, is a subscription video-on-demand platform dedicated to curious music far beyond jazz, as it touches on world, R&B and more.

Groening spoke to Variety while finishing an episode of “Disenchantment” for its upcoming season.

Variety: When it comes to you and jazz, one can’t help but look at your saxophone-playing creations Lisa Simpson and Bleeding Gums Murphy. An Entertainment Weekly interview in 1991 quoted you as saying you gave a sensitive Lisa a sax to work out her angst and channel her emotions. But in 1996, in the New York Times, you said it was just funny to give an 8-year-old a sax to play.

Groening: A baritone saxophone to play. I love jazz, and thought it would be humorous, in an animated show, to give a young girl the talent to play a horn in the style of Gerry Mulligan. A big honking saxophone. I also thought it would be cool to have a different sax solo playing during the closing credits. That was vetoed, but we do have something at the top, a little bit of soloing, played by the “studio musician available that day.’” … Now, by the way, in the animated fantasy show I have at Netflix, “Disenchantment,” Mark Mothersbaugh does a theme song that’s Eastern European brass band-klezmer with accordions and tubas, and we have those different kinds of solos on the opening and closing that I always wanted for “The Simpsons.”

And Bleeding Gums Murphy? Legend has him based on Sonny Rollins, but I always found him to be more Rahsaan Roland Kirk-like.

Murphy is a combination of every blues guy with a funny name. I also happen to be a huge fan of Kirk. When I was a teen, I went to a used bookstore and found a copy of his “Rip, Rig and Panic.” I bought it because the cover looked cool, but the music blew my mind. From there, I pursued avant-garde jazz to the fullest extent – at least the extent of a teenage kid in Portland.

You shied away from more mainstream jazz at that point.

I did. From there, it was Archie Shepp, Ornette Coleman… all the weirdos. I did, however, discover that you didn’t have to punish yourself every step of the way, and found friendly horns players too, like Mulligan. I discovered swing players, trumpet guys like Miles Davis and Roy Eldridge, and even their elders such as Bix Beiderbecke, and 1920s jazz — cartoon music.

If you’re talking cartoon jazz, you surely are a fan, too, of Looney Tunes’ Carl Stalling, and John Zorn’s curation of that music.

I was so into Carl Stalling that I tape-recorded his soundtracks while they played on television. There’s nothing like driving in Los Angeles, with the top down, and playing that music loud while stuck at an intersection. People do look. Zorn did do several compilations of that music, and even created several pieces with string quartets that used Stalling’s musical language. I have played a lot of weird music for my kids, but, the only stuff they ever asked me to take off was Zorn’s Stalling-inspired music (“The String Quartets” from Zorn’s Tzadik label, 1999). I reached out to Zorn for “The Simpsons” to see if he would do some of the soundtrack. He sent me a cassette of his cartoon music. I played it for my collaborators, and they… balked. I figured out, then, that most people don’t like skronky, crazy music. They want a melody and a pleasing tone… That said, I get pitched current pop songs all the time for scenes on “The Simpsons,” and I have no idea what they’re talking about.

Loving jazz, noisy and not-noisy, is not like listening to loud rock or rap as a kid. Were your parents cool with it? Could you share jazz with your oddest young friends?

In high school, my best buddy, Richard Gehr, the music writer, and I were able to share our love of avant-garde jazz, Zappa and Captain Beefheart around school – the more obscure, the better. My dad liked 1920s jazz, Paul Whiteman, the real cornball stuff, and really cheesy Hawaiian music from the 1940s. I grew up with a lot of old 78s.

Was your fandom of Zappa and Beefheart  the gateway into avant-garde jazz, or vice-versa?

I would say simultaneously. I discovered Stravinsky, too, around this same time – a two-hand piano version of “The Rite of Spring.” That changed my life completely. I realized that there was more that you can do with music beyond melody and arrangements. You could also organize it through rhythm. That was Zappa and Beefheart’s appeal: their use of unconventional rhythms. By extension, I got into jazz.

The gig at Qwest TV: how does the conversation begin?

I stumbled onto Qwest TV on my own, and was very excited by the idea of it, the wide range of music they had. Then, I was called out of the blue and asked to curate my own video playlist. Completely unexpected. And I take pride that I am the only non-musician out of all their curators. There’s hip-hop and bebop and African music. They have two videos of the Meridian Brothers from Bogota, which I now have on my list. The Brothers happen to only be one guy, someone who makes classical electronic music and applies it to Colombian cumbia. That’s incredible.

Knowing your passion for the avant-garde, did you feel compelled to include more conventional artists such as Ray Charles on your video list? That’s choice stuff, as you include Ray at the Antibes Jazz Fest in 1961 with the Count Basie Orchestra, and Lambert, Hendricks & Ross.

My goal is not to scare people. I didn’t want everything to be mysterious and intimidating. Look, anytime I do an interview around my musical tastes, I tell them Beefheart’s “Trout Mask Replica,” Romanian brass band music and the Beatles, and the writer only mentions the Beatles in the story. This Qwest TV list of mine is my whole mix — so much of what I love, music and videos that have personal meaning to me. Like, I saw Clark Terry in college, and always admired him. That’s more traditional than most of my choices. Jamaican guitarist Ernest Ranglin is on here, and he made some of the best instrumental reggae music of all time. Lambert, Hendricks & Ross? I love their album “Sing a Song of Basie,” and had never seen them perform before.

Which is exactly one of the biggest points of Qwest TV’s existence. Most of the players are gone. Many of the past masters of jazz and the avant-garde have rarely been seen, so these videos bear witness to their genius.

Qwest TV pulls back the curtain. Many of these older performances are, at least in the U.S., exceedingly rare. If you see them at all it is fleetingly via brief YouTube clips, rather than these full concerts. You get to see just how the musicians did it.

Was there ever a thought to the currency of social issues or causes? You include a somewhat recent concert of saxophonist Archie Shepp doing “Attica Blues,” which – when first released in 1972 – was one of the first protest musical expressions toward prison reform.

Many issues surrounding systemic racism that are in our awareness now, at least the last few years, were on blast by many avant-garde musicians some time ago, Shepp in particular. “Attica Blues” is a landmark.

What connects the dots on your Qwest TV list, and what does that list say about you that your vision for “The Simpsons” or “Disenchantment” can’t?

So many of these artists represent lack of compromise and dedication to a vision without softening the edges. I also have a predilection for melodic invention combined with various deviations. A lot of the artists are a little crazy too: whatever they hear in their head, they have to do. I always think of myself as a commercial artist working in the medium of television, which has to be very unintimidating. So it’s fun for me to listen to adventurous, uncompromising artists and musicians who do what they want to do – and I can share that love here.