Skip to content
Home » News » Man Leaves Store After His Card Is Declined. 15 Mins Later He Comes Back With A Cop That Says One Thing

Ever have one of those times where you are shopping for something that you really need, only for the cashier to tell you that you card has been declined? So you try to swipe the card another time (or a third) hoping that it goes through and no one notices what’s going on.

This is when the strange stares and chatter begins about how you are not able to pay for your items. You tell the cashier that you have money in the account so there must be some kind of mistake or error. Then unfortunately, you end up leaving the store with nothing and feeling embarassed.

Some people would never step foot again in a store after that embarrassment, but one pawn shop customer wasn’t about to let a declined card stop him from getting what he wanted. Once the man’s card was declined, he stepped out of the store embarrassed, but fifteen minutes later he came back – this time with a cop. The cashier immediately asked ‘Is there a problem officer?’ and the cop gave a response they’d never forget.

The pawn shop Alicia Danielle works at doesn’t look like much, but the store stocks all sorts of knickknacks, like a pair of dumbbells or stereo speakers, that someone will probably eventually buy. One man even found a pair of shoes that he liked! Unfortunately, it wasn’t meant to be. Alicia told Love What Matters on Facebook:

“So this guy comes in to buy a pair of shoes because his are literally falling off. Anyway his card wouldn’t work so he left.”
The man was probably hoping that the bank would let the transaction go through, even though he already knew the funds weren’t there. Hey, it never hurts to try! Sometimes miracles can and do happen. Unfortunately, in this poor man’s case, the universe wasn’t on his side – at least not right at that moment! The only thing he was walking out with that day was the same pair of tattered shoes that he walked in with.

However, this guy wasn’t going to let anything get between him and that pair of shoes. A few minutes after he left, the employees noticed the same man return, only this time, he had the law on his side! The curious employees asked the policeman who suddenly appeared on their doorstep if there was a problem.

“The cop is like ‘No there’s no problem but if you still have the shoes I’d like to go ahead and buy them.’ So him and my co-worker split the cost of the shoes.”

In her Facebook post, Alicia said that there was no one else in the store, and that neither the officer nor her co-worker did this with the intention of getting social media high-fives for their generosity. Theirs was a genuine act of kindness, for the sake of being kind. 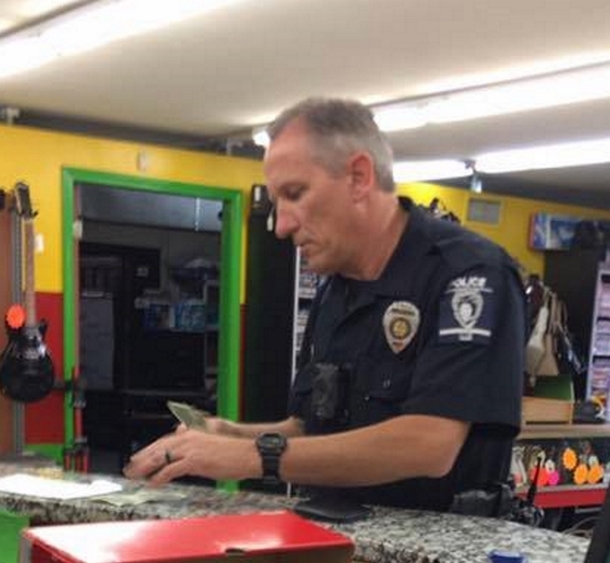 Alicia wanted to share this story because she feels there is such much hate, mistrust and division in the world we live in today. Good deeds don’t get the attention they deserve, and they happen under the radar every single day. Even small acts kindness can do wonders for rebuilding our global soul!

“We still have so far to go, but I promise you small acts of kindness like this are what’s going to rebuild trust and faith in our communities. I didn’t get the cop’s name but this didn’t go unnoticed or unappreciated by me or the customer.”

There are some moments we witness that will stay with us for the rest of our lives. This is certainly one of them! Alicia’s post has been shared more than 1,700 times and has received over 19,000 reactions.