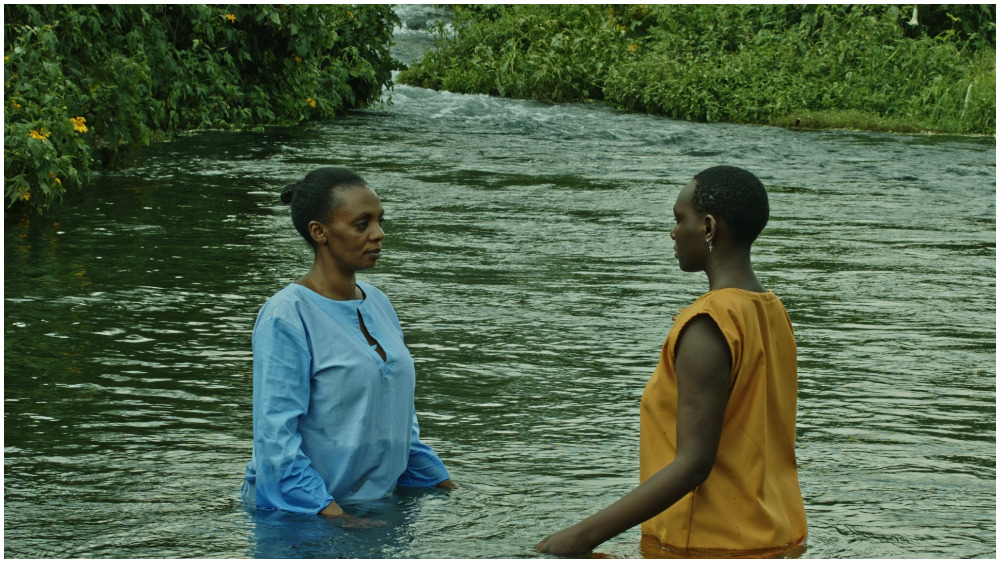 Rwandan director Kivu Ruhorahoza’s “Father’s Day,” which bows in the competitive Encounters strand of the Berlin Film Festival, is a timely story of fatherhood in a country that saw a generation orphaned by one of the worst atrocities of the 20th century.

The film presents a trio of interwoven stories set in the East African nation. A mother tries to cope with the loss of her only son. A young woman prepares for an organ donation that could save the life of a father who she never truly loved. And a young boy roams the city with his father, a small-time crook with anger management issues, who introduces him to a hustler’s life.

Though it is not a film about the Rwandan genocide, said Ruhorahoza, as is so often the case in a country still reeling from that bloody period, the genocide and its lingering trauma provide the backdrop for the on-screen drama.

The 1994 genocide saw more than 800,000 Rwandans — mostly from the minority Tutsi ethnic group — murdered by ethnic Hutu extremists. Most of the violence was perpetrated by men, many of whom were subsequently imprisoned or fled the country.

In the aftermath, said the director, Rwandans were forced to confront the fact that “the father figure has betrayed society and has betrayed those that he was supposed to protect and guide and advise.

“In the ‘90s, there was so much violence unleashed on society by men. And at some point, that violence was so overwhelming to the point that the most vulnerable members of society had to look elsewhere for comfort and guidance, because men had lost their moral authority,” he said. That has led to what Ruhorahoza described as “a clear crisis of malehood and fatherhood,” in which many are “questioning the role of fathers” in Rwanda today.

It’s a conversation that has played out in the public sphere and inspired the director in his latest film. “When we see young adults and women stepping up or questioning male authority on the radio or at community meetings, creating safe spaces for themselves to talk about the issues in the community without the guidance of men, I think it’s an interesting thing that I wanted to talk about, but in a cinematic way,” he said.

“Father’s Day” is produced by Dida Nibagwire, Ruhorahoza, and Gaël Faye for Iyugi Prods., and executive produced by Enrico Chiesa and MaryEllen Higgins. The film is written by Ruhorahoza.

The 39-year-old is a genocide survivor, though he has been hesitant to confront that tragedy directly in his work. Trauma is nevertheless present across his films. His first feature, “Grey Matter” (2011), which played in the Tribeca Film Festival’s World Narrative Features competition, is a surreal study of a filmmaker struggling to make his first movie in an African country recently torn apart by war. His 2019 IDFA premiere “Europa, ‘Based on a True Story,’” is a provocative portrayal of a love affair gone bad that both mirrors the growing social and racial tensions in Great Britain and Europe and offers a study in displacement.

“Father’s Day” confronts the legacy of the genocide in a way that Ruhorahoza perhaps would not have grappled with a decade ago. “As a storyteller, I’m at peace now,” he said. “I know that my role is also to be a witness of my time to some extent, and my obligation, or my duty, is to genuinely try to educate myself on any situation that I’m choosing to be a witness of.”

That responsibility extends to the way his films are financed and produced, particularly “when it comes to such heavy subjects like a film on the misery of a large group of your people or other people,” he added.

“I think it’s important to try and make a clear plan on how production is going to benefit as many people involved in it as possible. And society. How do we make [a film] that improves the lives of whoever’s involved in it?”

The economics of cinema as viewed through the lens of a filmmaker from the Global South have been a preoccupation of Ruhorahoza’s since “Grey Matter,” in which the aspiring director Balthazar faces a string of rejections as he tries to raise money for his film. In one biting scene, a funder explains that it would be easier for the filmmaker to finance his movie if he worked H.I.V. or other “relevant” subjects into his script.

More than a decade – and several prestigious festival premieres later – Ruhorahoza is no more optimistic about the financial hurdles faced by African filmmakers, who still largely rely on North American and European funding bodies. It’s a system, he argued, that’s freighted with often unrealistic eligibility criteria for African filmmakers, ponderously slow, and averse to the kind of risk-taking, boundary-pushing, formally inventive cinema that a director with his resume might otherwise be encouraged to pursue.

“The freedom that’s afforded to a director to go and play with the rules and make your script a living document and be able to experiment while shooting, it doesn’t happen to [African filmmakers],” he said. “If I write something that takes a major artistic deviation or will try new things with the medium, it’s usually unfundable.”

“Father’s Day” was shot on a micro-budget of roughly $50,000. The production was preceded by an intensive, eight-week workshop for local film professionals shadowed by experienced local technicians. (The workshop was supported by the German Corporation for International Cooperation.) Ruhorahoza said it’s his goal to make the workshop an annual event that will in turn lead to the creation of more fiction, documentary and episodic content by young Rwandans.

“I want to encourage younger professionals to work with models that are financially viable and know that if you don’t have $600,000 [from] funding bodies from Europe, you can make a film and take it somewhere and make it truly yours and truly Rwandan,” he added. “So it’s also meant to try and contribute to this ecosystem that we’re trying to build.”