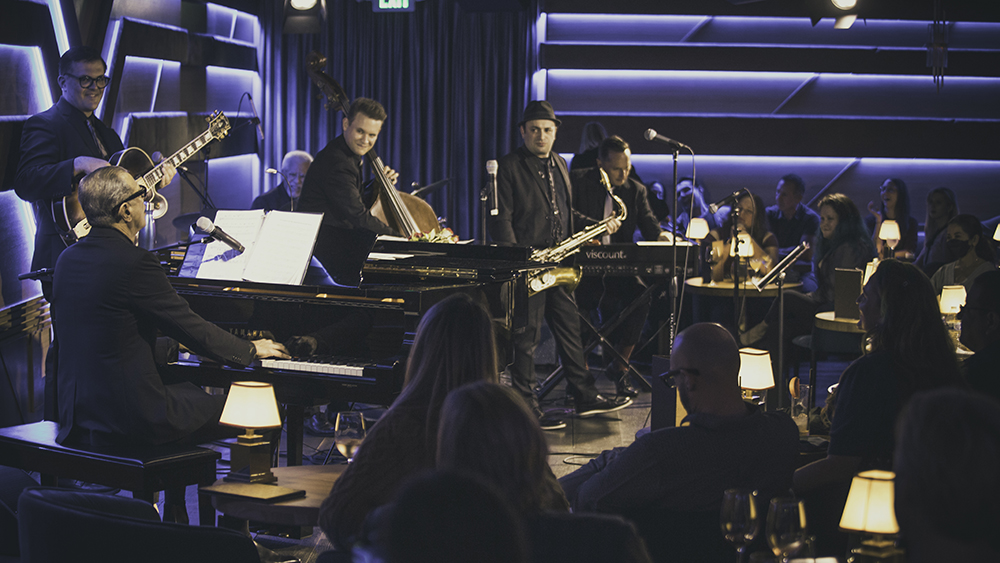 Jeff Goldblum gave renewed meaning to the oft-used phrase “intimate concert” on Wednesday night during his jazz comedy show at The Sun Rose in West Hollywood.

Before Goldblum was joined on stage by the Mildred Snitzer Orchestra, with whom he has released two jazz albums, the “Jurassic World Dominion” star kicked off the show solo by getting to know his audience. But this wasn’t your average pre-concert Q&A or call-and-response game. Goldblum went down a list of attendees’ names and held personal conversations with a good portion of the cozy 100-person room. Many were called at random, but Goldblum did find a few friends in the venue — including “Russian Doll” actor Charlie Barnett and TV host Naz Perez — and chatted about everything from upcoming weddings and microdosing to his recent trip to Italy to walk in Prada’s fashion show.

“You like the jazz music? Well, we’re gonna play some,” Goldblum said once the Mildred Snitzer Orchestra members walked onstage. Taking his seat at the grand piano, Goldblum and his band — consisting of John Storie on guitar, Alex Frank on stand-up bass, Joe Bagg on organ, Kenny Elliott on drums and Scott Gilman on saxophone — hopped right into an upbeat number, sailing through tricky time signature changes, with each member adding their own improvisational flair.

But of course, the audience wasn’t just there to see Goldblum tickle the ivories — though he proved to be quite talented at that — and he made sure to pepper in some jokes and interactive games between songs. At one point, Goldblum was handed a sheet of paper from backstage and prompted the audience to guess the top five movies at the box office given a quote, claiming he had no knowledge of what was on the page. The game quickly turned musical when “Top Gun: Maverick’s” mention led to the orchestra playing Kenny Loggins’ “Danger Zone” with Goldblum singing along, which then segued into Loggins’ other big movie hit, “Footloose.” Naturally, this particular game was leading up to Goldblum’s film, “Jurassic World Dominion,” being No. 1.

Jeff Goldblum sings “Danger Zone” and “Footloose” during a jazz show at the Sun Rose. pic.twitter.com/7Xr2FpXSEO

“I see why we’re doing this. This is so self-serving,” Goldblum said with a laugh. “I’m so sorry. I had nothing to do with this.” He then read a quote from the film, trying his best to be deadpan: “‘I had a dog once who humped my leg so much I had a callus on my shin bone.’ What movie and who said that?” Goldblum asked, feigning as if he had no idea. “You!” the audience enthusiastically shouted in response.

During the show, Goldblum also welcomed two special guest singers: Gina Saputo, who sang classics “Moon River,” “Don’t Fence Me In” and “Lazy Afternoon,” and Bonnie Gordon, who joined Goldblum and the band for a cover of Steve Lawrence’s “Bewitched.” Both singers were clearly honored to be performing next to Goldblum, and engaged in endearing banter with him before delivering silky-smooth vocals to match the orchestra’s jazzy stylings.

But it was Goldblum’s interaction with the crowd that proved the most entertaining of all, as exemplified by a woman sitting in the front row who raised her hand after Goldblum and the orchestra played a bossa nova song. With tears welling up in her eyes, she told Goldblum that she was from Brazil and the song had made her emotional because she misses her family. Goldblum was clearly moved by this, as was the rest of the crowd, and the night ended on a high note as Goldblum and the orchestra played their last few songs with a revived energy. But as Goldblum thanked the crowd and said goodnight, the orchestra couldn’t resist one more nod to their leader’s latest box office hit, playing the “Jurassic Park” theme as the audience exited the venue.

E. Gunnar Mortensen, Camera Assistant on ‘The Morning Show’ and ‘Transparent,’ Dies at 39

E. Gunnar Mortensen, Camera Assistant on ‘The Morning Show’ and ‘Transparent,’ Dies at 39

No, Armie Hammer Isn’t Working as a Hotel Concierge in the Caymans

No, Armie Hammer Isn’t Working as a Hotel Concierge in the Caymans