How to Recover From a Financial Resolution Slip-up 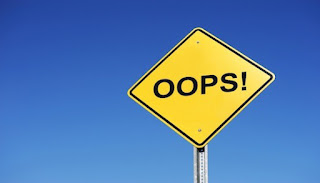 “Giving up smoking is the easiest thing in the world. I know because I’ve done it thousands of times,” Mark Twain famously said.
In the same way, many of us resolve over and over to spend less, save more, reduce debt and otherwise clean up our personal financial acts, only to find ourselves doing the equivalent of lighting up after a no-smoking vow.
Saying it’s common to slip-up on a New Year’s resolution is almost like saying winter cold is common in Alaska.
Studies of New Year’s resolves, for instance, indicate behavior change is usually short-lived.

After a year or more, the success rate for New Year’s resolutions is in the low double-digit percentages, according to most research.

So how should you respond if you slip-up on a financial resolution?
Say you use a credit card for a frivolous expense when you’ve promised yourself you wouldn’t, or you forgot to pay a bill and are now facing a hefty late fee.

What do you do?

The Transtheoretical Model
The main key to dealing with slip-ups is to understand the overall picture. Experts in changing personal behavior describe change not as an event, but as a process. This transtheoretical model, as it’s known, presents change as a series of stages.
The early stages, precontemplation and contemplation, are when you are just starting to think about changing. In the middle stages, preparation and action, you make it happen. Maintenance is the final stage where you’re trying to hang onto your gains.
Change is a Process

Relapses, slip-ups, backsliding — whatever you call it — can happen at any stage. And it’s important to understand that few people go through the stages seamlessly from beginning to end.
It’s normal to move back and forth from, say, contemplation to precontemplation, as you see your way to lasting change.
The point is, slip-ups are normal and natural. So the first thing to know about a slip-up is that it’s not the end of the process — it’s part of the process.
A slip-up doesn’t mean you’ve failed. It means you’ve taken a wrong turn and are now engaged in getting back on track.

How Far Off the Track Are You?

Next, figure out how far you have really gotten off track.
Say you are trying to break your habit of spending $5 on a latte every day. After a month of success, you suddenly find yourself standing outside the coffee bar with milk foam on your upper lip.
At this point you have stuck to your objective in 29 out of 30 days. That progress is far more meaningful than a one-day slip-up.
You may have strayed somewhat, but you are still generally on track. Don’t respond as though it’s the end of the road.
Similarly, if you incur a $30 late fee, or fail to make your monthly savings contribution two months in a row, it doesn’t negate all the times you have paid on time or made the full contribution.
You made one or two mistakes — you did not fail. Treat it that way. React wisely, not wildly.

Fix Your Mistakes
Next, see if you can fix it. You may be able to convince a creditor you paid late to waive the late
fee this once. You may be able to pay a credit card balance in full before interest charges accrue.
Proactively working to minimize financial damage from a slip-up improves your personal finances
and increases your confidence.
And Now Learn from Them
Why did you charge $100 on your credit card at a fancy restaurant when you had sworn not to Examine the circumstances.
The people you were with, the mood you were in, or the fact that the card was in your pocket instead
of in a drawer back home may be things you could change in future situations.
Similarly, you may decide that taking a different route to work, one that doesn’t go by the coffee bar, will minimize latte lapses. Or you may be able to set a bill up for automatic payment to reduce late fees.
By learning from and taking action to avoid slip-ups, you can avoid more and potentially bigger mistakes later on.
The Bottom Line

None of this is to say that slip-ups are desirable or that it’s smart to ignore your resolutions and sabotage your long-term plans.
It is smart, however, to realize that change is a process, that mistakes are normal, often correctable,
and rarely fatal, and that you can turn a slip-up into a learning opportunity that will make you more
likely to reach your personal financial goals.