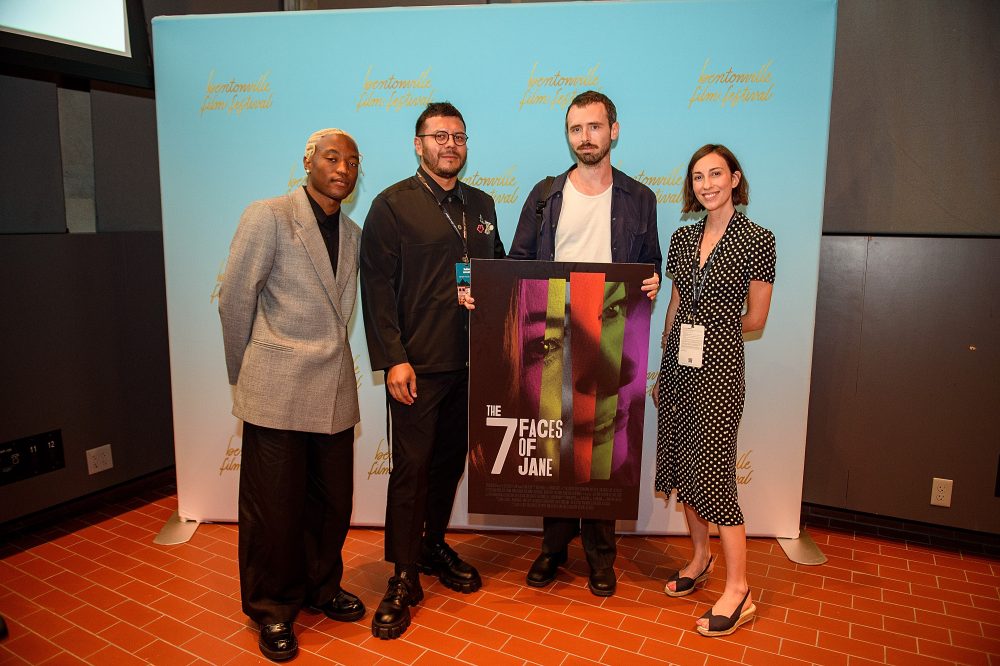 This is Geena Davis’ sage advice to filmmakers when crafting stories aiming to incorporate inclusive storylines and characters.

“Nobody is going to second guess if it says the scene takes place at, say, ‘a police station which is 40% women,’ or if there’s a scene where ‘a crowd gathers, which is half female,’” continues the Oscar-winning actor and founder of the eponymous Geena Davis Institute on Gender in Media.

“Specify what it is. You have to write in the script.”

That advice came to fruition in “The Seven Faces of Jane,” a surrealistic anthology film that held its world premiere at Geena Davis’ Bentonville Film Festival’s eighth edition last night in the quaint Arkansas city, home to Walmart’s global headquarters. The fest, founded and chaired by Davis, runs in-person through June 26 and in a virtual format until July 3. Highlights of this year’s fest include Geena and Friends, an event where Davis and a group of female actors, including Brianne Howey (“Ginny & Georgia”) and Chelsea Javier (“Smile or Hug”), reimagine all-male dialogue of a script through a female lens and a 10th anniversary screening of “The Hunger Games.” The fest will also honor producer Effie Brown (“Dear White People,” “Passing”) with its Rising to the Challenge award. Fin Argus, who stars as an aspiring drag performer on Peacock’s reboot of “Queer as Folk,” will receive the BFF Rising star Award.

The fest was born of Davis’ vision that inclusion and diversity are integral to the creative and professional growth of entertainment. But diversity also contributes to the economic health of the film biz, notes Madeline Di Nonno, president and CEO of the Geena Davis Institute on Gender in Media.

“From our study – what we affectionately call the Gina Benchmark Report – we looked at the 100 largest grossing films 2007 and 2017,” says Di Nonno. “And we found that female-centric films generated 55% more at the box office, and that films that had a diverse cast generated the most money – you’re talking about $90-$100 million. So, this is big money. Doing good is good for business.”

To that end, ‘The Seven Faces of Jane,’ produced by such industry vets as Roman Coppola and Jason Baum, comprises a string of dramatic vignettes directed by an eclectic slate of helmers from all walks of life: Julian Acosta, Xan Cassavetes, Gia Coppola, Ryan Heffington, Boma Iluma, Ken Jeong, Alex Takacs and Gillian Jacobs, who also stars in the titular role as a mother who embarks on a series of mind-bending adventures after dropping her child off at summer camp. The film is based on the drawing game “exquisite corpse,” a method wherein a collective of words or images is assembled.

“Roman always wanted to do a project using this concept,” says ‘Seven Faces of Jane’ producer Allison Amon. “He loved the idea of bringing diverse filmmakers together to create something.”

The experimental film took 18 days to film, and each director had two weeks to write their script and two days to shoot their segment. The directors drew cards and were given “a beat,” but it was up to them to decide on specific characters and story arc. They knew in what order their segment would appear, but not much else. They had no idea what came before, or what came after.

“‘The Seven Faces of Jane’ represents seven diverse directors – male, female, [people] of color, not of color – and all of them are being seen through this lens, passing the baton to one another,” says Wendy Guerrero, president of programming for the Bentonville Film Festival. “It was just so creative and so exciting to see this diverse group of directors collaborating in such a way to tell such an amazing story about our world.”

For Acosta, whose directorial segment takes place in a sprawling Mexican market in L.A., the project was a way to dive into his own memories of growing up in Bakersfield, Calif. And how that shaped his cultural and ethnic identity.

“Location was so important when filming,” says Acosta. “They create a flood of memories. I remember growing up and going to places like New York – I’m a fourth-generation Mexican-American and I don’t speak Spanish – and my parents would take me to those markets and it was hard. I hated being at places like that. Because I was trying not to be Latino. And now when I go to those places it’s like an instant flooding emotion. Like, this is who I should be. This is who I am. This is fully ingrained in who I am. And that was really special because, as filmmakers, I would say that we are all exploring through our work. I mean, my therapist can only take so much.”

Iluma, whose directorial includes an episode of “The Chi” and the 2021 short film “Comfort,” delved into his identity as a Nigerian American.

“I’d never seen a story centered around a Nigerian American,” says Iluma of his segment. “Sitting around finding our identity in America as a Nigerian – what is that like? I wanted to find a way to create that space for other immigrants – not only Nigerians but all immigrants – trying to find themselves in a culture that isn’t there.”

Gia Coppola, Roman’s niece and the director of such films as “Palo Alto” and “Mainstream,” knew that her segment was to take place at a coffee shop. Beyond that, she had free rein. The experience was liberating – if overwhelming at times.

“I remember in the early stages when [the project] was sort of ruminating in Roman’s mind and we were talking a bit about ‘After Hours,’ the Martin Scorsese film, which [centers on] a hero’s journey, someone just kind of going through many random, weird, different sort of circumstances,” she recalls. “And so that always stuck in my mind: what’s the most bizarre thing that could happen to you? And then just be imaginative about it. I always knew that my card was a coffee shop, but originally we were going to have a different coffee shop. And we lost that location last minute. Those are the circumstances of filmmaking.”

For Coppola, surrendering one’s artistic power is often the path through which great art is made.