COLLEYVILLE, Texas — The 11-hour Sabbath hostage crisis at Congregation Beth Israel, did not appear to shake anyone out of their routines in the Dallas suburb of Colleyville the following day.

Residents of the affluent, predominantly Christian town of 26,000, peppered the sidewalks, walking their dogs or out for a stroll with their spouses. The few cars making use of the wide roads appeared to all be heading to one of the town’s many churches for Sunday morning services.

The only out-of-the-ordinary features were the two police SUVs parked on each side of the 6100 block of Pleasant Run Road where the synagogue is located, and the several dozen journalists camping out at a nearby middle school where one could get the best angle of the synagogue for a live dispatch.

Locals were of course well aware of what had unfolded at the small Reform synagogue on Saturday, particularly those living in the immediate vicinity who had been forced to evacuate their homes.

But none of the roughly two dozen people living within a quarter of a mile from the synagogue who spoke to The Times of Israel seemed to know any of CBI’s roughly 140 families, let alone any of the members who had been inside. In fact, many of them did not know a Jewish resident of Colleyville at all.

Rabbi Charlie Cytron-Walker was the one exception. Those coming out of Good Shepherd Catholic Church after Sunday services were quite familiar with the CBI spiritual leader, who was held at gunpoint with three of his congregants by a British national who sought the release of a terror convict imprisoned 15 miles southwest of Colleyville. 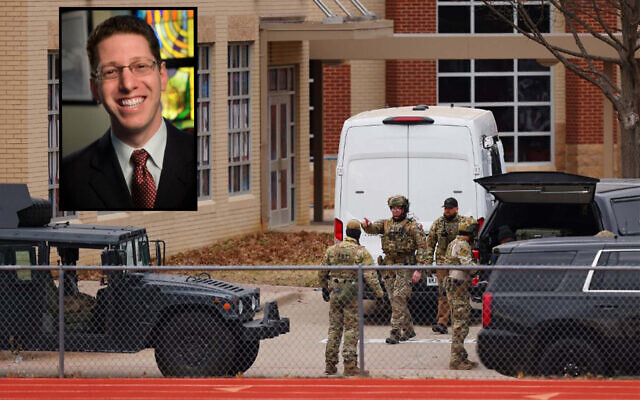 Cytron-Walker’s interfaith activism led him to forge a friendship with the pastoral leadership at Good Shepherd and he paid a number of visits to the church in recent years, congregants said.

Good Shepherd opened its doors to assist in the response efforts as the hostage standoff unfolded, hosting Jewish, Muslim and Christian faith leaders who were dispatched to provide support for the relatives of the CBI hostages as they waited in anguish to learn of the fate of their loved ones. The church staff also took care of journalists covering the ordeal, providing them coffee and allowing them and come inside for breaks as they waited for updates in below-freezing temperatures.

Pastor Michael Higgins made a point of updating congregants of the support role the church played as the synagogue a quarter of a mile away endured its most trying hours.

“I was really proud to hear about the way we accommodated people,” said Jim Delaney, speaking to The Times of Israel in the church parking lot. “That’s the kind of people we are. That’s Texas people.”

Save for “Rabbi Charlie,” whom he recalled once recited a hymn at the church, Delaney said he didn’t know anyone else in the Colleyville Jewish community.

“I don’t know that they are that active because I never see any kind of activity,” he speculated. “They just put up a gate, but I never saw them open it.” 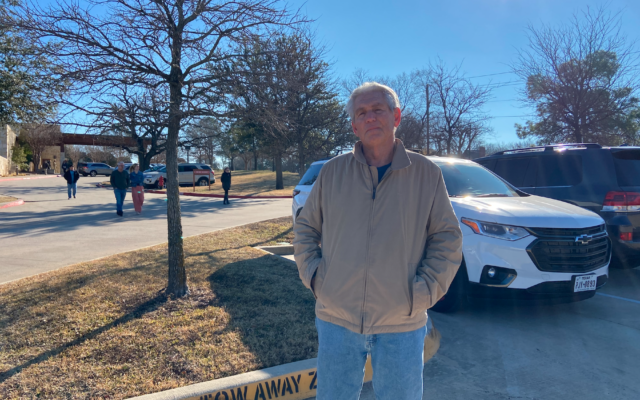 Asked if what unfolded at CBI gave him pause about showing up at a house of worship the next day, the 73-year-old was dismissive.

“I don’t worry about nothing,” he said. “I got prostate cancer, I could go at any time. Obviously, that’s a good cancer, so I find it to be a blessing, but I don’t let these things run my life. I don’t think Texas people do in general.”

Others outside the church seemed to agree with Delaney.

“Yes, it’s scary what happened, but we don’t think twice about coming here. It strengthens our faith,” said Antony, standing next to his wife Lisa.

The two of them were convinced that the hostage standoff could just as well have taken place at Good Shepherd. 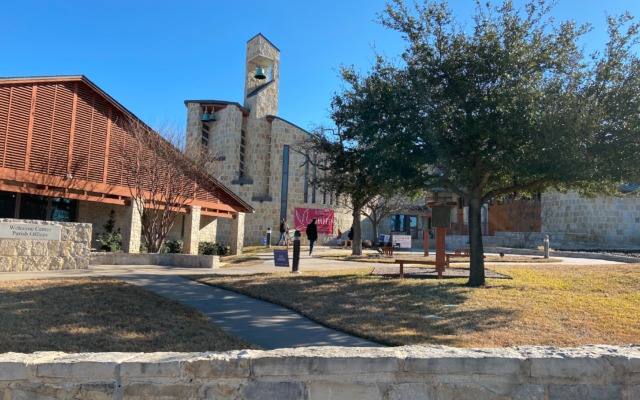 “If it happens over there, it could happen over here too. There’s no doubt about it,” Lisa said as her husband nodded.

The belief appeared at odds with that of many of the Jewish groups, who said CBI was deliberately targeted in an antisemitic attack.

Jeff Cohen, one of the four people held by hostage-taker Malik Faisal Akram Saturday, told ToI Monday that the gunman said he chose CBI because it was the closest synagogue to the prison where Aafia Siddiqui is being held. Akram subscribed to antisemitic tropes and was convinced the Jews inside CBI would be influential enough to free the Pakistani prisoner serving an 86-year sentence for terror charges.

“I’m not saying the fact that it was a synagogue was irrelevant, but people do all kinds of crazy stuff, and there just as easily could’ve been someone who thought he needed to take a church hostage in order to release someone,” said Tim Waller who lives a couple of blocks south of CBI and was ordered to leave his home when the standoff began.

Further down the road of multistory homes and long driveways, a man who only identified himself as Roger was walking toward his garage from which he had hung a “Let’s Go Brandon” flag, indicating his opposition to US President Joe Biden. 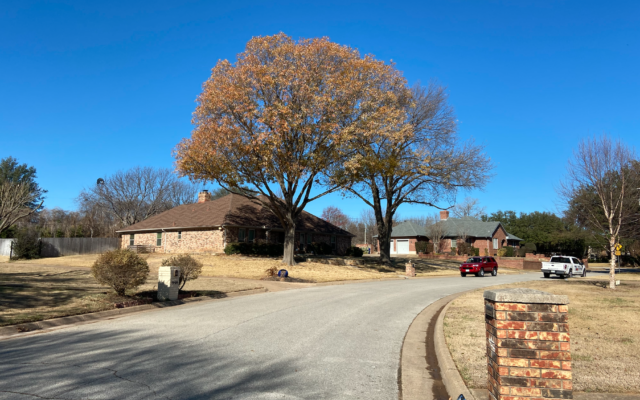 He identified me as a reporter and warmly asked if I was finding my way alright.

But asked whether he was fazed by what had happened blocks away just hours earlier, Roger quickly turned serious and appeared surprised by the question.

“Why would anything change?” he asked perplexed. “I watch the news every day and see stuff like this happening every day.”

Roger too didn’t know any Jews in the community, though he said he thought one of his friends might’ve mentioned the Cytron-Walker once.

A block away from CBI, just beyond the police roadblock, Jennifer Newell was in the process of arranging the laminated, black letters on the Pleasant Run Church’s sign. She only changes it once a week, typically offering light-hearted messages to those driving by. Newell had just updated the sign on Saturday but decided to do so again less than 24 hours later.

When she finished working, it read, “Praying for our brothers and sisters at Beth Israel.” 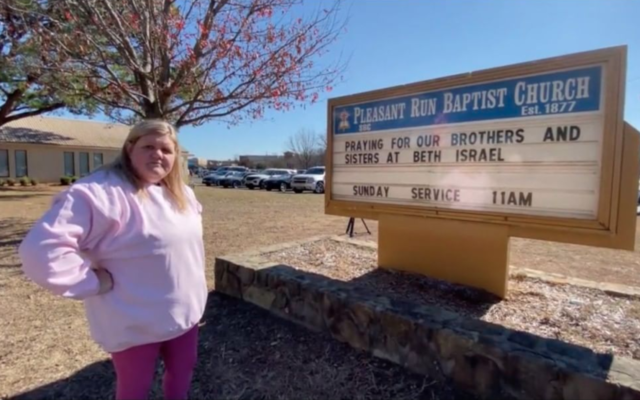 “It’s the smallest gesture that we could do, just letting them know that if they ever needed anything, it doesn’t matter what their background or denomination is,” Newell said. “At this point, none of that truly matters. What matters is being there for each other.”

She confessed to never having met someone from the synagogue across the street save for one request last year from a CBI member who wanted to use the church parking lot for car overflow from a “peace walk” organized for community members of all faiths.

Asked how she was coping with the traumatic events of the weekend, Newell admitted to being “terrified.”

“We held services today at our church, and quite honestly every noise I heard I turned around to check the door,” she said. “We don’t have the security that we maybe should have as our building is over 140 years old. I think after this we’re going to have a conversation about finding a better solution than what we currently have as far as security goes.”

Newell said that she’s asked herself repeatedly why Akram chose CBI and has not been able to come up with an answer. 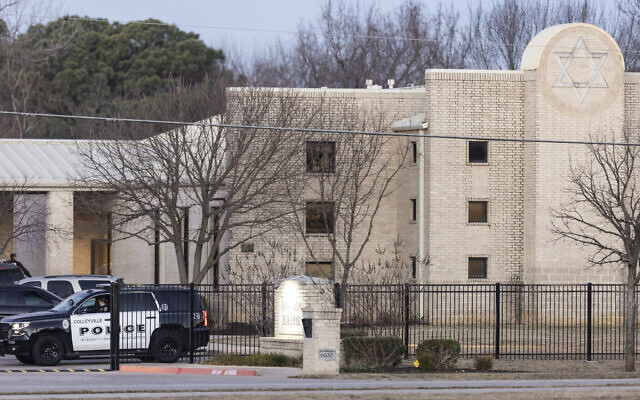 “I wish I had an answer, but I just don’t know,” she lamented.

“But it’s definitely scary. If you drive up and down Pleasant Run Road, you’ll run into five or six different churches of different denominations, and quite honestly had this been on a Sunday, it could have been any of us,” Newell said.

But she wasn’t letting that feeling stop her from offering support for the one house of worship that was in fact targeted.

“I just want to let the rabbi and his followers know that we’re not very far — we’re literally right across the street, and if they ever need anything, hopefully, they know that they can reach out to us,” said Newell. “It doesn’t matter what denomination they are. We’re all family.”