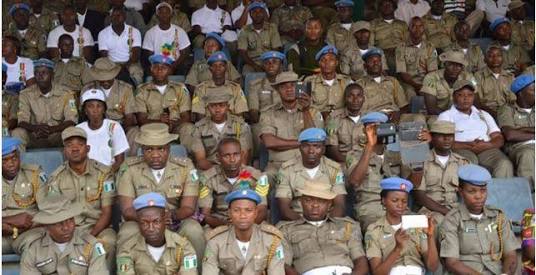 Members of the House of Representatives on Thursday rejected the attempt to override President Muhammad Buhari’s veto of the Peace Corps bill.

President Buhari on February 27 declined assent to a Bill for an Act to Establish Nigerian Peace Corps, citing paucity of funds and duplication of duties of existing security agencies by the proposed corps as his main reasons.

But some lawmakers felt the bill had popular support, and that going by the rate of unemployment and insecurity in the country, a Peace Corps enacted as a government agency would help curb some of the challenges.

Nicholas Ossai (PDP, Delta), while addressing journalists in Abuja February 27, had said the president made a huge mistake by declining assent to the Bill.

Mr Ossai vowed to collate signatures of lawmakers to override the president’s veto.

Consequently, the lawmakers, again, began the process to give legal backing to the existing Peace Corps of Nigeria, a non-governmental organisation, when Sunday Karimi (PDP, Kogi) sponsored the bill and it passed first reading earlier in the year

Sources familiar with the situation told PREMIUM TIMES that members who were initially in support of the veto override began to back out due to pressure mounted on them by the presidency.

Members of the House, especially those from the North, did not want to jeopardise their return tickets on the platform of the ruling All Progressive Congress (APC) under the leadership of the President Buhari, while others were scared of what they described as “witch-hunt”.

Most of those who opposed the bill on Thursday were APC lawmakers.

Mr Karimi who sponsored the bill through first reading, backed out from the move, leaving the bill at the mercy of Committee on Rules and Business for two months.

At the risk of final extinction and in a move to allow the bill complete its legislative circuit, the Chairman, House Committee on Rules and Business, Emmanuel Orker-Jev (Benue – PDP) on Thursday prepared the bill for a second reading.

The bill was slated as number one business on the Order Paper of Thursday with the long title ‘A Bill for an Act to establish Nigerian Peace Corps, to develop, empower and provide gainful employment for the youth, facilitate peace, volunteerism, community services, neighbourhood watch and nation-building; and for related matters (HB. 89)’.

Mr Orker-Jev, while leading the debate, said apart from the jobs that would be created through its establishment, the Peace Corps would compliment the activities of other security agencies like police and civil defence in maintaining law and order in the country.

Rimande Shawulu (PDP, Taraba) speaking in favour of the bill, also said there was need for the establishment of the corps to assist other security agencies.

“There is need for us to bridge the gap in internal security. Actually there’s a very wide gap in policing of this country,” Mr Shawulu, who is Chairman, House Committee on Army, said.

Rita Orji (PDP-Lagos), was of the opinion that recovered Abacha loots should be channelled to funding the Peace Corps.

The lawmakers took turn to debate in favour or against overriding the President’s veto.

The summary of the line of debate of pro-Buhari lawmakers was that the reasons given by the president were cogent enough to lay the bill to rest.

They argued that having served in the Nigerian Army as a general and serving currently as the Commander-In-Chief of the Armed Forces, Mr Buhari has first hand information about the security of the country more than anyone else.

Those in support of the bill countered that being the Commander-In-Chief does not give the president exclusive knowledge of security in the country, stressing the Corps would help in reducing crimes and insecurity if established.

Mr. Ossai, who had earlier said he would lead a campaign and personally undertake collation of signatures to override the presidential veto. eventually succumbed.

“The rejection by Mr President gives us the opportunity to redeem ourselves for passing the bill in the first place.” Mr Ossai said.

House Chief Whip, Alhassan Ado-Doguwa (APC, Kano), admitted that the Corps would provide job opportunities to teeming Nigerian graduates; but since the president had vetoed the bill, he was in best position to know what was good for the country.

The House was, however, thrown into a rowdy session, when a lawmaker from Sokoto state, Musa Sarki, used the platform to campaign for Mr Buhari’s re-election.

“The solution to Nigeria’s security challenges and what will bring lasting peace is not by supporting Peace Corps Bill but by supporting President Buhari to come for a second term,” he said.

The last minute effort of the Speaker, Yakubu Dogara, to salvage the situation could not yield result, as pro-Buhari lawmakers seemed to have been adequately mobilised for a serious showdown.

As if that was all they came to the plenary to do, as soon as the question was put by the Speaker and a resounding Nay voice vote rent the air, the pro-Buhari lawmakers were seen jumping up, hugging each other and celebrating that the bill fainted.

Thereafter, most of them left the chambers, leaving a few others to continue with the rest of the business of the day.

With the setback suffered on Thursday, the Nigerian Peace Corps Bill can be considered dead except the executive arm of government chooses to recall the bill and take a second look at issues formulated therefrom.