The digital media boom has led to numerous file formats for audio and video content of varying quality and ubiquity, whether you consume your media on desktop, smartphone, tablet or dedicated media player. Some, such as MP3, MP4, Wav to Music Audio, are ubiquitous, while more esoteric formats such as OGG and FLAC offers technical advantages, but might be unsupported on some devices. Fortunately, conversion software comes to the rescue, allowing you to input your media files, and then convert them into another format. Here are some of our favorite free apps.
10 Best Free Video Converter Software for MP3, MP4, Wav to Music Audio

Free download
Handbrake is a free, open-source video transcoder that hits the sweet spot when it comes to ease of use and power features, allowing you to rip non-copy protected DVDs, as well as transcode video files from a variety of formats into two commonly-used wrapper formats (MP4 & MKV). Handbrake comes with a system of presets to allow novice users to quickly rip DVD videos and transcode the output into formats optimized for a variety of devices, while advanced users have a plethora of features and settings to fine tune the output to their liking, including selecting from a spread of audio and video codecs, subtitle and chapter support. The bloatware-free installer is another plus.

Free download
For one-stop media conversions, it’s hard to go wrong with Freemake Video Converter, an all-in-one converter that can take numerous audio, video, and photo file formats and convert them into device-friendly forms. Freemake supports many device presets that ensure compatibility when importing videos or music to a particular smartphone or tablet model. You can tweak output quality and other technical settings. An easy to use interface simplifies workflow and guides you through the process. Some features, such as subtitles, DVD menus, and blackbar removal, are available by donating.
Note: Do watch out during install, as Freemake tries to install extras such as a toolbar and OpenCandy-recommended software.

Free download
Wonderfox’s Free HD Video Converter Factoryprovides a nice, easy-to-use multimedia converter program for free, supporting a wide variety of audio and video formats, with options to convert them to almost any other format of a similar type, with a variety of presets to ensure compatibility with a range of smartphones and other device-friendly formats. Users can set the bitrate and resolution, configure the encoders used and tweak the frame rates, sample rates, and audio channel settings. The app even includes a video downloader for ripping web videos. The free version limits you up to 720 HD settings, with 1080 Full HD, 4k resolutions, batch conversions, and other features available in premium version, HD Video Converter Factory Pro. Still, even with these limitations, it’s a great package.

Free download
Format Factory strikes a nice balance between usability and customization. The main pane allows you to drag and drop files for conversion, and there’s numerous supported formats, a wealth of device and quality presets to keep things simple, and the ability to further modify settings within these presets to your liking. Besides audio and video conversions, Format Factory also includes DVD ripping, as well as audio and video joining features for extra value.
Note: Pay attention, as Format Factory tries to bundle software during installation, as well as the first time you start up the program.

Free download
DVDVideoSoft Free Studio is a collection of converter programs and other media utilities united under a launcher. The grab bag of audio-video tools covers conversion as well as video downloads, media ripping and more. When it comes to conversions, while there are numerous device presets and quality profiles available. Actual configuration of your output within those presets is fairly sparse, with presets and converters inconveniently split across numerous submenus. Still, it comes with loads of extra functions besides conversion, so it’s still worth a shot.
Note: DVDVideoSoft will recommend installing extraneous software, so keep an eye open and read the check boxes during installation.

Free download
The free Wondershare Video Converter is another handy all-in-one media converter that does a good job of converting your media files to a variety of formats, while also including a ton of extras. Users can convert files or DVDs, add subtitles, edit the videos, configure encoding quality, and merge video files. While Wondershare can convert to a variety of formats, easy device-compatible presets are part of the Pro version. The app also includes DVD burning, a video downloader and a built-in media player. Additional tools, such as media streaming and DLNA support are part of the premium Video Converter Ultimate package.

Free download
Rather than drown users in a ton of technical settings and options, Convertilla takes the extremely spartan approach, allowing for simple format conversion to a variety of formats, with presets compatible with a variety of mobile devices. Customization options for the output are minimal, with sliders for quality and a dropdown for output resolution. Still, its simplicity is its virtue, as Convertilla makes for a simple, easy to use converter.

Free download
AVC or Any Video Converter is another handy conversion tool that starts off with a simple interface but gives you a lot of options to play with. AVC allows users to convert video files, DVDs, DVD ISOs and even online streams. Its primary focus is to convert videos into device-compatible formats, so AVC comes with a variety of handy presets for iPhones, iPads and Android, as well as mobile Windows devices, and even the Playstation and Xbox consoles. AVC also comes with a selection of basic editing tools, allowing users to take snapshots of a video, create clips, add visual effects, as well as configure the output file’s audio and video quality. 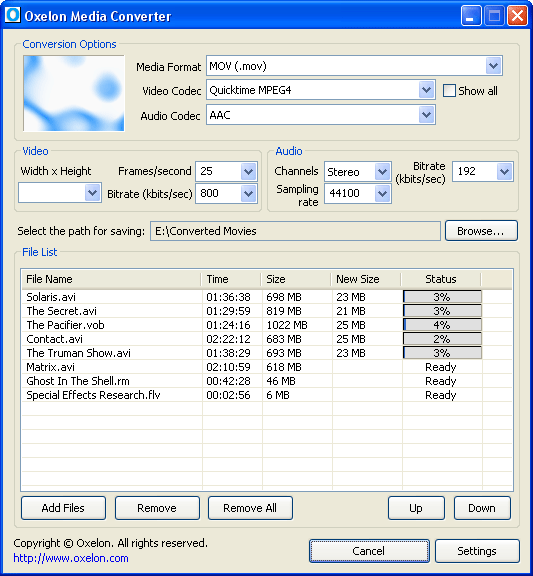 Free download
Oxelon Media Converter may not have the slickest UI, but it does deliver its features straight up front. Users can convert a variety of source files to common and obscure audio and video file formats using a variety of audio and video codecs, with users able to configure video resolution, framerate, and bitrate, as well as sampling rate. It’s a handy, low-frills media conversion tool if you’re looking for something that does the job with no fuss and no extra fluff.

Free download
Fre:ac – Free Audio Converter (formerly known as bonkenc) is a free and open source CD ripperand audio conversion program supporting MP3, MP4, WMA, OGG, FLAC, ACC, WAV and bonk formats. Fre:ac’s interface isn’t as polished as many of the previous selections (for example, choosing the codec for your output file requires you to dig in the options, rather than easily set on the main screen), but Fre:ac includes numerous configuration options for the supported encoding formats, multicore support, tag editing and organization, CDDB integration for ease of tagging, and the option to export to the original input directories, letting you keep your original folder organization.
Use google enhanced tool to find post via abujarock.com
Tags: Video Converter