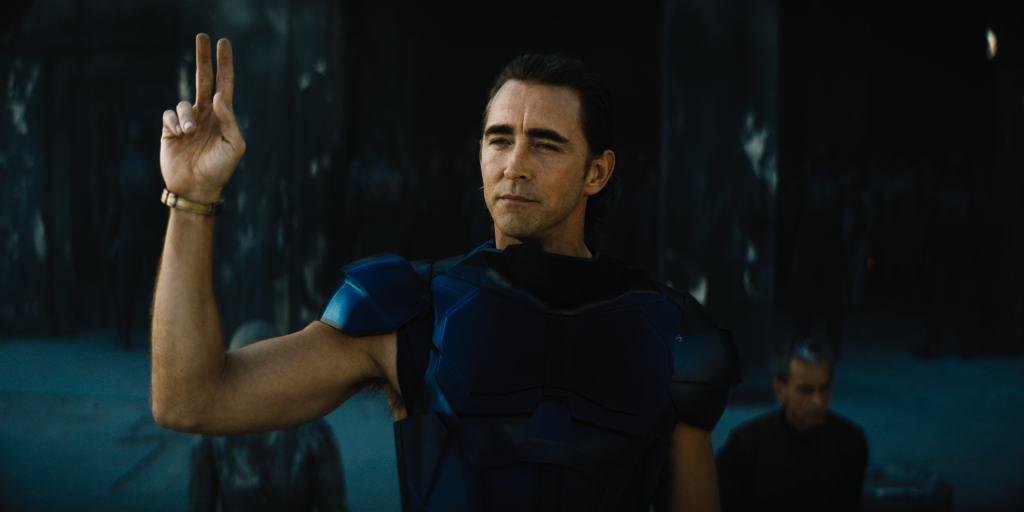 “Foundation” isn’t TV’s first stab at adapting a dense, beloved book series to the screen, and it won’t be the last. But in taking on Isaac Asimov’s seminal works of science fiction, the new Apple TV Plus drama does, at least, do something rather unusual for adaptations. Instead of doing its best to faithfully recreate its source material’s most iconic characters and storylines, David S. Goyer’s “Foundation” uses Asimov’s texts as inspiration for a markedly different version (and one that, it must be said, uses Apple’s significant budget to frequently dazzling effect). Remixing Asimov’s characters, settings and themes into something more timely and fitting for television versus the page, this iteration of “Foundation” thrives most when becoming something all its own.

The one character who remains largely unchanged from Asimov’s original cast is one of “Foundation”‘s most pivotal figures overall. As Hari Seldon, a mathematician who kickstarts the story after calculating that the end of the galaxy as everyone knows it is nigh, Jared Harris is perfectly cast. Hari, like most brilliant academics, has a healthy ego and loves the sound of his own voice — a combination that, in the wrong hands, would weigh down most every scene. In Harris’, though, Hari maintains a revealing balance of confidence and vulnerability that makes it easy to understand why so many decide to follow him to the literal end of the universe when he and his dire predictions are banished there. In this version of “Foundation” though, Hari isn’t quite as singular as he might be in Asimov’s books. Instead, the show twists several of Asimov’s other characters to serve as crucial hinges right alongside him — and, eventually, past him.

The two most obvious examples of this approach come in the form of Gaal Dornick, a fellow mathematician who confirms the validity of Hari’s hypothesis, and Salvor Hardin, who acts as the first mayor of far flung planet Terminus in the Asimov version but becomes an efficient warden in this series. As written by Asimov, both of these crucial characters are also white men. As written by Goyer and company, they’re both young Black women who quickly prove themselves to be something special. As played by Lou Llobell, Gaal is sharp, curious and impulsive. As Salvor, Leah Harvey shoulders much of the series’ harder action sequences with steely resolve. Neither get to interact with the other, but they each imbue the series with a similar determination and drive, creating new versions of these characters that ring true to the universe in which they now live. (Does “Foundation” also need to bookend every episode with Gaal’s voiceover intoning about the infinitely vast nature of time and space? Not especially, no, but there are worse guides than Llobell’s engaging lilt.)

In a particularly smart twist on the source material, TV’s “Foundation” takes Asimov’s almighty Emperor Cleon and quite literally clones him into three different versions of himself. At the point we drop into the story, a revolving door of Cleon’s clones have been ruling much of the universe for 400 years. At any given time, three Cleons exist: a young “Brother Dawn,” a mid-aged “Brother Day,” and an elderly “Brother Dusk.” This incestuous line of succession is a fascinating concept that the show unwraps meticulously, helped in large part by nuanced performances from Cassian Bilton as a wary Dawn, Lee Pace as the bombastic Day, and Terrence Mann as old guard Dusk. Together, the Cleons are a symbol of an old guard built to withstand the tides of change; separately, they do their best to not be anything unique at all.

As with the more compelling aspects of “Foundation,” the Cleon clones are an especially intriguing way to interpret modern crises through the perceptive lens of science fiction. (See also: a devastating terror attack that resembles an exponential version of Sept. 11, Hari’s end of days warning echoing our own world’s very real climate change scientists.) That this system exists to protect a single man’s vision escapes no one, but after Hari’s calculations reverberate around the empire, it becomes an even more urgent sticking point. So-called “border planets” begin to question why they should keep listening to a single man for the rest of time, with charismatic leaders such as T’Nia Miller’s Halima challenging their authority to their face (or at least one of them). Hari, in part due to his awe of Gaal’s young mind rivaling his own, insists to the emperors that their collective refusal to acknowledge the value of “difference” will be their ultimate downfall. In such moments, Pace and Mann tap into a shared, visceral disdain that betrays more personality than their respective Cleons would likely care to admit exists. On the sidelines, omnipresent but only fleetingly powerful, their loyal robot servant Demerzel (Laura Birn) gets some of the series’ more human moments, especially in quieter, heartbreaking moments that Birn aces.

Not every storyline, unfortunately, is quite as grounded as those concerning Hari, Gaal and the Cleons. As Salvor Hardin’s days on Terminus get tangled in an intergalactic conflict with Pharra (Kubbra Sait), a vengeful army general from a planet Day once ravaged almost on a whim, she also gets lost in the show’s messiest storyline. It makes sense that Pharra would want to hurt the Empire for destroying her planet; it makes less sense why “Foundation” doesn’t quite afford her background the same time and consideration that other similar figures throughout the series get, especially given how much she ends up driving the Terminus thread. Through several episodes of her snarling at Salvor, we only get a brief flashback to the worst moment of her life in order to explain her single-minded quest. Given how well the show balances most everything else, it’s disappointing when Salvor and Pharra keep clashing in much the same way, over and over again.

In taking on material as wide-ranging as Asimov’s — which spans generations, millennia and entire galaxies — “Foundation” had its work cut out for it. And yes, as someone who came into the show relatively cold, the sheer scope of it was absolutely daunting. So it’s remarkable, really, that the drama is immediately organized enough that its frequent jumps through time and space rarely confuse. Instead, in just a few episodes, “Foundation” quickly makes the case for being one of TV’s most expansive sci-fi epics with smart world-building, sweeping directing, and lush visuals that differentiate every timeline with finesse. Yes, it can be self-indulgent, meandering and more complicated than need be. But that feels somewhat inevitable, given the scope of the task at hand. That “Foundation” is otherwise nimble and engaging, even for those unfamiliar with the work that first inspired it, is down to its willingness to buck the Cleons’ line of wisdom and change with the times.